Jesus Christ was oppressed, persecuted, hunted, imprisoned, tortured, and murdered by organized government and religion. He taught those who would be willing to be his disciples to love their enemies. He didn’t just teach this idea of “enemy love,” he lived it throughout his entire life. Jesus died, out of love, for his enemies.

Because enemy love is what was enacted on the cross, it is central to the Christian lifestyle. This command of enemy love became the most-often-quoted verse during the first four centuries of the Christian church. Until the 4th century, followers of Christ lived out enemy love even in the face of death, never acting violently towards their oppressors.

For early Christians, enemy love was the hallmark of what it meant to believe in Jesus.

The story of how Christianity got hijacked by empire is a sad one, and it is the reason why most Christians ignore Christ’s commands today.

The single most defining characteristic of a Christ-follower is the most offensive position in America, and therefore it has become the least taught. Let’s take a look at the most radical and crucially central command of Christian living.

Jesus was known for holding authority over and above the scriptures of the prophets. God had been taking his people on a trajectory away from violence since the time of Noah (Genesis 6:11, 13). The culmination of this trajectory came in the way of Jesus.

You have heard that it was said, ‘Eye for eye, and tooth for tooth.’ But I tell you, do not resist an evil person.
Matthew 5:38-39

This Old Testament command of “an eye for an eye” seems barbaric but it was actually intended to limit retribution. The justice of all the other lands around Israel was more like “ten eyes for an eye.” God was taking his people on a journey towards enemy love. With Jesus, this command is overturned and replaced with “do not resist an evil person.”

The Greek word for ‘resist’ is anthistemi, and it most often refers specifically to violent resistance. In the Old Testament, the word was used to describe military action, and in the New Testament, it was used to describe violent revolts. The new command of Jesus can be better translated to “Do not use violence to resist evil.” Why though? Because Jesus brought a new way of living…

You have heard that it was said, ‘Love your neighbor and hate your enemy.’ But I tell you, love your enemies and pray for those who persecute you, that you may be children of your Father in heaven. He causes his sun to rise on the evil and the good, and sends rain on the righteous and the unrighteous.
Matthew 5:43-45

While nowhere in the Old Testament is it commanded to hate your enemy, it was commonplace to do so. Here Jesus takes the command to “love your neighbor as yourself” and stretches it to its limits. The Old Testament seemingly allowed Israel to use violence against their enemies, but in any case, this wasn’t the ideal. Loving your enemies is the ideal. With the coming of Jesus, it became mandatory.

Today we aren’t just supposed to love our neighbors, we are commanded to love our enemies… and it is a condition for becoming a child of God. (according to Jesus in Matthew 5:43-45) 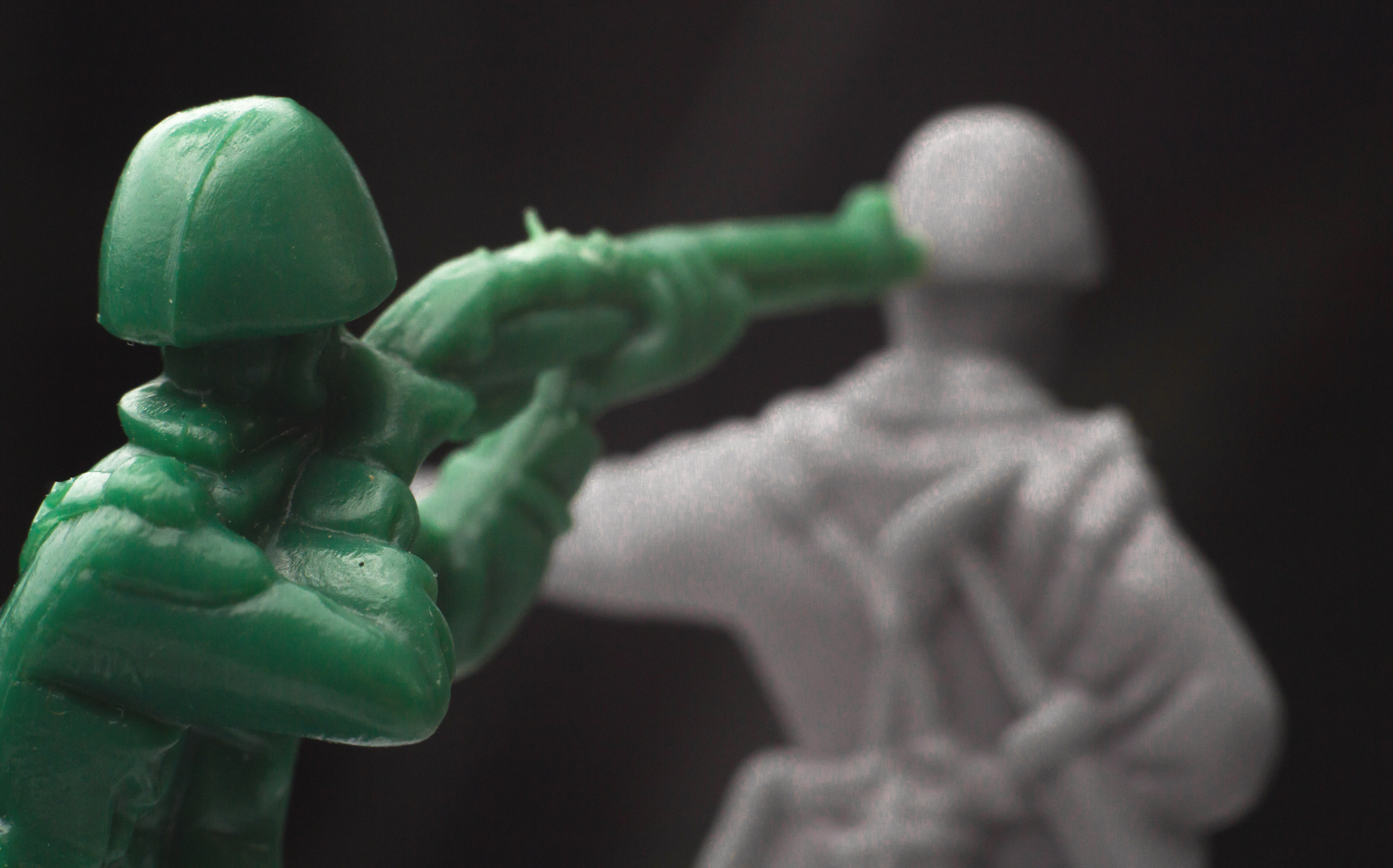 There isn’t a command from God that Christians try to get out of more than love your enemies. The command is often ignored or if taught, it isn’t taken very seriously. In order to know what Jesus meant by “love your enemies,” we should take a look at the two words: ‘enemy’ and ‘love.’

“When Jesus told us to love our enemy, he didn’t mean someone threatening our life, what he meant was someone who we don’t get along with.”

When Jesus said “love your enemies,” there was an enemy that every Jewish listener would instantly think of: the Romans, the group of people who carried out Christ’s execution. Jesus was talking to people who were not only threatened by vicious terrorist enemies, they were already conquered by them. The Romans would sometimes put dozens—in a few cases that we know of, thousands—of Jews to death (usually by crucifixion) just to flex their muscle. If you can imagine living in an America that was conquered and then subsequently ruled by ISIS, you can get some idea of what Jesus was asking of his disciples when he told them to “love their enemies” and to never retaliate against them.

For 300 years the early Church had to watch their families be crucified, beheaded, fed to lions, or be burned alive. Yet, rather than retaliate or “protect” themselves with violent force, these early Christians considered it an honor to follow Jesus’ example by letting themselves get crucified. In fact, the gracious way they died was one of the main catalysts for the rapid growth of the Church throughout the first three centuries.

The word ‘enemy’ does not mean a grumpy neighbor, it means someone who wants you dead.

“When Jesus told us to love our enemy, he didn’t mean to put an evil person’s life over our own, he just meant don’t be mean to them.“

So, if the term enemy means anything from grumpy neighbor to someone who breaks into your home with a gun, or ISIS, what does the term love mean? It certainly can’t mean love enough to be self-sacrificial, can it? In English, the word ‘love’ can mean many things. You can say you love pizza but you likely wouldn’t die for pizza. When you say you love your spouse you don’t mean the same thing when you say you love football, or at least hopefully not.

In Greek, there are four words that get translated into the English word ‘love.’

That last one, agape is the word used in John 3:16, “for God so loved (agape) the world that he gave his only Son.” Agape is also the word used by Jesus when he tells his disciples that all the law and the prophets hang on two commands, “love God and love others” (Matthew 22:37-40). Interestingly, when Jesus told his followers to love their enemies, he used the word agape. The significance of this cannot be understated.

In John 21:15-17, after his resurrection, Jesus asks Peter if he loves (agape) him. Peter responds that yes, he does love (philo) him. Why did Jesus use agape and Peter use phileo? Jesus was asking Peter if he loved him with the love of God, a love that may require sacrifice. After all, Jesus had just gone through horrendous torture for Peter’s sake (and ours), something he did not want to do but did anyway because of his agape love. In contrast, Peter responded with the word phileo. Peter is not convinced that he is capable of loving Jesus with agape love, evidenced when he avoided possible torture by denying Jesus.

The point is, agape love is not simply an impulse generated from feelings. Rather, agape love is an exercise of the will, a deliberate choice. This is why God can command us to love (agape) our enemies (Luke 6:27-28; Exodus 23:1-5). He is not commanding us to “have a good feeling” for our enemies but to act in a loving way toward them. Agape love is related to obedience and commitment, and not necessarily feeling and emotion. ‘Loving’ someone is to obey God on another’s behalf, seeking his or her long-term blessing and profit. 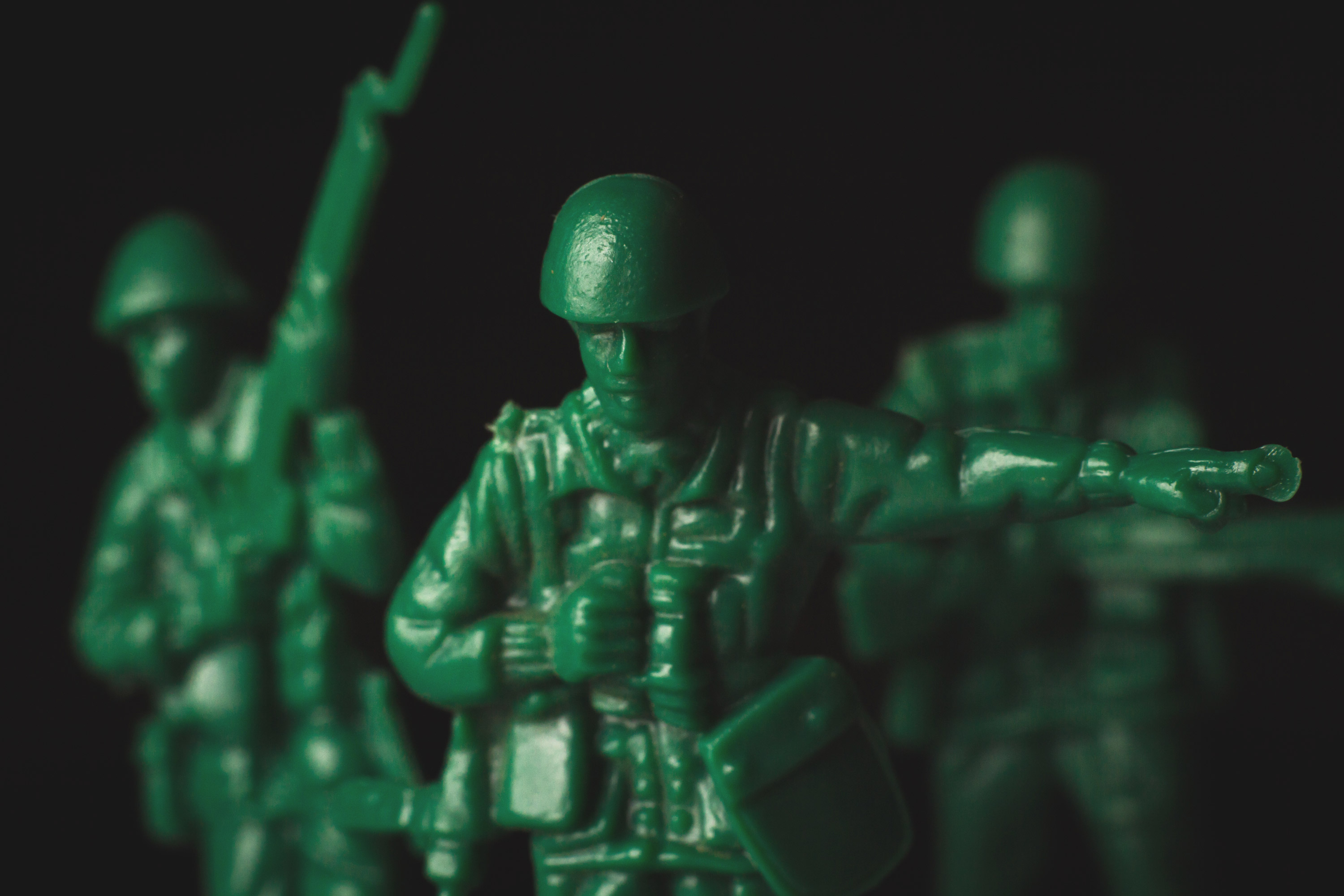 Right before Jesus gave his most difficult command he prefaced it with “to those who are listening I say…” Jesus knew that only some would actually listen to him. It’s expected that many people left after what he said next. Will we leave and ignore what he had to say?

Christians love their enemies instead of killing them because Christians are a new creation and are part of the Kingdom of God. Only in that context does it makes sense.

The love of Jesus is no more on display than when we love our enemies. Loving, blessing, and praying for your enemy (Luke 6:27-28). Feeding your enemy (Romans 12:20). Doing good things for evil people (Luke 6:35, Romans 12:17). Never taking vengeance (Romans 12:19). Responding to violence with nonviolent love—even if it brings suffering (1 Peter 2:19-21). These are not options, but the primary character traits of those who claim to follow a crucified God (Ephesians 5:1-2).

Everything Jesus said, every parable, paradoxical statement, act of healing, or caring for the poor, culminated in the way of enemy love. The very core of the heart of God is summed up in three words: “love your enemies” (Romans 5:10). It exemplifies the deep love that God has for us. It is what Jesus did on the cross; it is the Gospel.

Jesus came and drew a dividing line in the sand of history. In order to be a part of his Kingdom, we have to love everyone with self-sacrificial love (John 18:36). Love of enemies is about recognizing the value and humanity of the one who you have dehumanized in seeing them as an enemy, and asking what you can do to end that hostility and work towards reconciliation.

Enemy love reorders the world into the way God designed it to function.