Weapons aren’t something that Jesus talked about very much. While Jesus had a lot to say about loving people and not using violence, he rarely (if ever) talked about ownership of weapons. There does seem to be one verse though, that may indicate that Jesus wants his followers to have weapons. Let’s take a look at the verse in question.

Upon first glance, it seems as though Jesus is telling all his disciples to buy swords. Some find this strange given all Jesus had taught about abstaining from violence and loving even enemies. Why would he tell his disciples to get swords if his teachings would prevent them from using them? (Luke 6:27-36) On the assumption that Jesus would not blatantly contradict himself, we should start with the assumption that Jesus did not intend his disciples to use the swords he seemingly instructed them to buy. Several things stand out if we look further into Luke’s account.

Like with any verse in the Bible, we should look at the surrounding verses for context when trying to understand what is being communicated. So let’s look at this verse in context:

Then Jesus asked them, “When I sent you without purse, bag or sandals, did you lack anything?”
“Nothing,” they answered.
He said to them, “But now if you have a purse, take it, and also a bag; and if you don’t have a sword, sell your cloak and buy one. It is written: ‘And he was numbered with the transgressors’; and I tell you that this must be fulfilled in me. Yes, what is written about me is reaching its fulfillment.”
Luke 22:35-37

The prophecy that Jesus is referring to comes from Isaiah 53:12. It seems that the purpose of having some of his disciples carry swords was not so they could defend him, but simply to fulfill this prophecy, thereby justifying his opponents’ arrest of him as a political revolutionary.1 This seems like it could be a valid interpretation, and it seems to be Jesus’ own explicit explanation.2

If Jesus had intended the swords to be used to defend themselves, the twelve disciples would need more than two. In the following verse (v38) the disciples show Jesus two swords and he replies, “That’s enough!” Surely two swords are insufficient to defend thirteen men.4 Jesus wasn’t the first or the last messiah figure to come on the scene, and all of them were known for being violent revolutionaries. Two swords were sufficient to make Jesus appear as, and ultimately to be crucified as, a political transgressor.

We could stop there but the majority of theologians don’t even interpret these verses in this way.

The majority of Biblical scholars don’t believe that Jesus is even being literal when he says to buy swords.5 William Klassen says, if Jesus was being literal it “subverts everything else Luke records about the nature of Christ’s kingdom.”6 James Edwards, in his commentary on Luke says, “‘Buy a sword’ is a metaphor of admonition and preparedness, not a sanction for violence and retaliation, and certainly not a sanction to spread the gospel by violence. If Jesus were a Zealot, ‘sword’ might conceivably be taken literally, but nothing in his ministry or teaching identifies him with this militant movement. A literal understanding of ‘sword’ would render the majority of Jesus’ teaching in chap. 6 null and void, including his testimony to being a servant leader immediately prior to this (vv. 26–27). Had Jesus intended the Twelve to take up real swords, would he have reprimanded the disciples for calling down fire on Samaria (9:54–55) or for resorting to swords (“No more of this!” v. 51) when he was arrested?” 7 Joel Green in his commentary says, “In v 38, then, the apostles manifest their dullness when they suppose that Jesus opposes his own extensive and emphatic teaching by encouraging them actually to possess (or to purchase) weaponry.” 8 These are just a few examples of many that claim that Jesus wasn’t literally telling his disciples to buy weapons.9 10 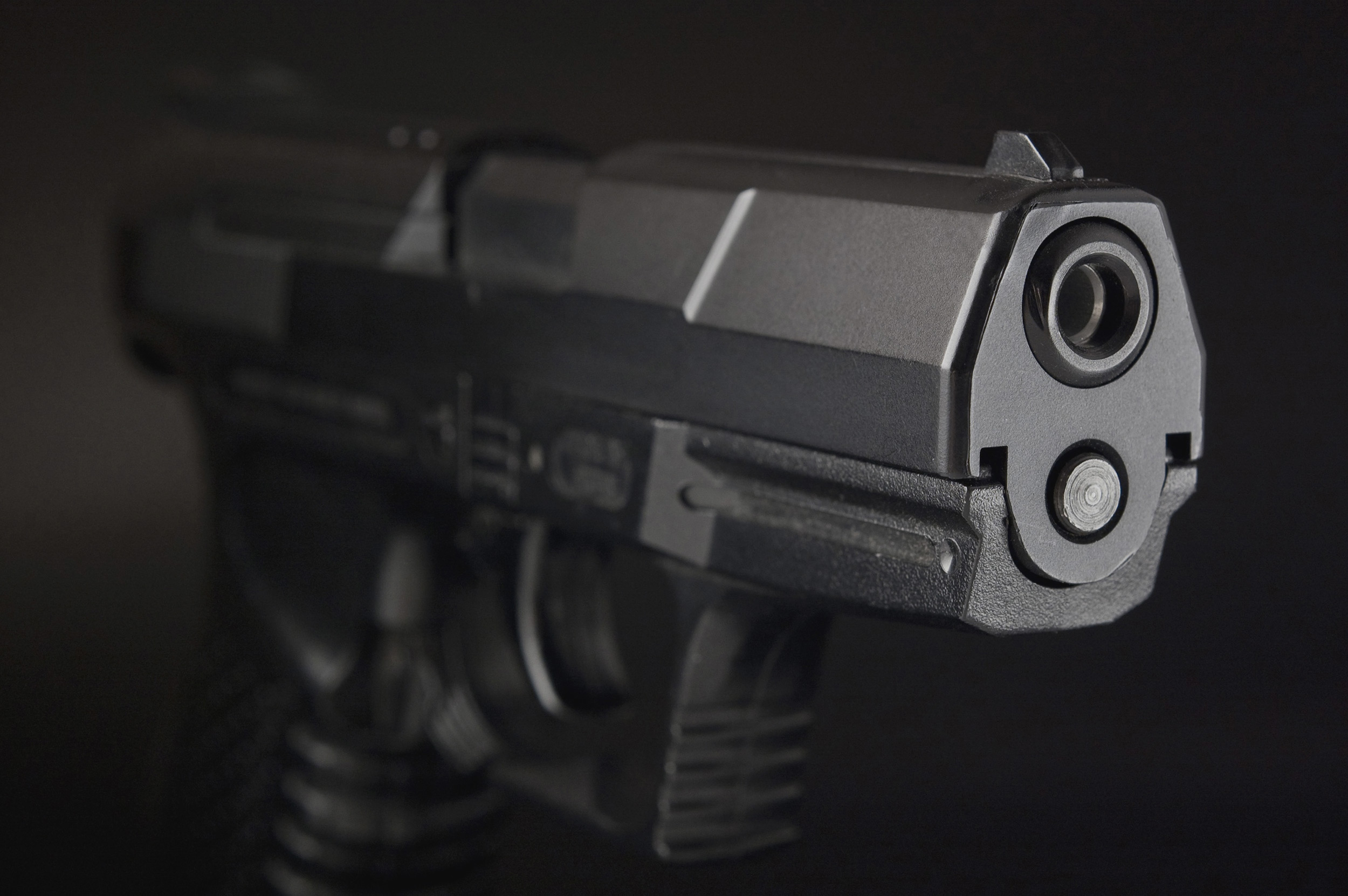 After Jesus states that he must fulfill the prophecy of Isaiah the story continues:

Although there is some debate on what Jesus means by “That’s enough!”, the majority of Biblical scholars think Jesus means “That’s enough of this conversation!” and is meant as a rebuke.11 This somewhat enigmatic phrase cannot mean the disciples should be content with two weapons.12 If Jesus seriously intended armed resistance, two swords would be pitifully insufficient.13 “That is enough” means “Enough talk of swords!”—drop the subject, dismiss the matter.’14

So what then did Jesus mean when he said: “buy a sword”? New Testament scholar I. Howard Marshall said that the command to buy a sword is “a call to be ready for hardship and self-sacrifice.”15 Darrell Bock of Dallas Seminary said the command to buy a sword symbolically “points to readiness and self-sufficiency, not revenge.”16 And the popular commentator William Hendriksen put it bluntly: “The term sword must be interpreted figuratively.”17 So when Jesus tells them to buy a sword, he is speaking figuratively about imminent persecution.18  According to this interpretation, when the disciples eagerly reveal that they already have two swords, they misunderstand Jesus’s figurative language (this isn’t the first time).

No More of This!

So the majority of theologians fall into two camps of interpretation: that Jesus was either speaking figuratively and his disciples misunderstood or that only two swords for 13 men were enough to be “numbered with the transgressors” in order to fulfill Isaiah’s prophesy. But what does Jesus have to say on the matter? Thankfully Luke isn’t finished with his story.

Just hours later that day, Jesus and his disciples are in the garden of Gethsemane surrounded by temple guards. Peter, with a sword in hand, asks Jesus, “Lord, should we strike with our swords?” Before Jesus could answer he “struck the servant of the high priest, cutting off his right ear” (v50). Jesus then says, “No more of this!” (v51), clearly indicating that he never intended for his disciples to rely on the swords they brought.19 Immediately after the prophecy had been fulfilled Jesus condemned the use of the sword.

Jesus warns Peter (and us all) that “all who draw the sword will die by the sword” (Matthew 26:52), a further repudiation of justified violence. After having rebuked the disciples’ typical worldly response to aggression, Jesus then modeled the way he would have disciples respond to aggression, by healing this guard’s ear (v51). You see, Peter cut off the ear of a soldier because he feared his enemies were derailing his plans for justice. But, Jesus healed the ear of the soldier because he knew his plan for justice included the healing of his enemies. According to Jesus, his disciples are to serve, bless, and pray for enemies, not afflict them.

Clearly, when read in context, we see that Jesus didn’t intend his disciples to use weapons.

The request to buy weapons, whether literal or figurative, was for specific people (the disciples) at a specific time (Christ’s arrest). It was to fulfill the prophecy of looking like sinners. Either two were enough, or the disciples completely misunderstood Jesus. Either way, the disciples weren’t allowed to use them. It is important to note that for the first 300 years of Christianity, no one interpreted Luke 22 to mean that Christians should arm themselves. Instead, all extant writings indicate that, for followers of Jesus, owning weapons was forbidden.

While Luke 22:36 is often used as justification for self-defense with weapons, this clearly is not what Luke intended to be communicated when he wrote this verse. Out of the top ten most respected commentators on Luke, only one took the self-defense view. There is little—if any—support from the text that Jesus all of a sudden advocates for violence in self-defense.

But what if someone breaks into your house? Well, that’s another question. (read more here)