The Letter Kills The Law isn't for Christians, thank God.

The Law consists of 613 terms and conditions that the ancient people called Israel followed to stay in a covenant relationship with God. Admittedly, there is some great stuff in the Law: don’t kill people (Exodus 20:13), be kind to immigrants (Leviticus 19:33-34), don’t cheat on your spouse (Leviticus 18:20). Then there are some pretty strange laws too: don’t tear your clothes (so no more tears in your jeans) (Leviticus 10:6), don’t eat shellfish (Leviticus 11:9-10), and of course, chop off a woman’s hand if she grabs your genitals (Deuteronomy 25:11-12). But, there also is some pretty nasty stuff in the Law too.

There are orders in the Law to stone disobedient children (Leviticus 20:9, Deuteronomy 21:18-21), burn daughters alive for prostitution (Leviticus 21:9), the endorsement of human trafficking for forced labor (Deuteronomy 20:10-11), genocide, and worse (Deuteronomy 20:14). The Law is filled with rules and commands that we unequivocally know are completely immoral and evil.

There has been long debate within Christianity as to whether or not we should follow the Law. Most would agree that we don’t need to follow all of it, but some argue that some of it should be followed. Which is it? Do we follow all, some, or none? If some, which parts? Thankfully, scripture actually makes it pretty clear.

Obeying Parts of the Law

Very few try to argue that we should follow the entire Law. If we did, the ladies would be required to leave town for a week every month and we wouldn’t be allowed to buy clothing with a blend of fabrics (Leviticus 15:19-33, 19:19; Deuteronomy 22:11). By far the largest camp of Christians fall into a nebulous category of believing that we should keep some parts of the Law. The question then becomes: Which parts of the Law are Christians supposed to follow?

It is often argued that only ceremonial and dietary laws were done away with, but the moral law still applies to Christians. The problem with this position though is that the laws are not divided into categories; the Law wasn’t written with separate categories in mind. They were not categorized in any way anywhere in Scripture, even by the order they were written. We as modern readers will sometimes categorize them for organizational or teaching purposes but they were never originally separated that way.

In the New Testament Paul is faced with a group of Christians who were confused about which parts of the Law they were still supposed to keep. They believed that the law of circumcision was still to be followed.

I declare to every man who lets himself be circumcised that he is obligated to obey the whole law.
Galatians 5:3

As far as Paul was concerned, there were no categories of laws where some applied and some didn’t—he taught that if one felt they had to obey any of the law, they would have to obey all of it.

So if there are no categories of laws and you have to either follow all of it or none of it, which is it? Does the Old Testament Law still apply to followers of Jesus? Paul seems to indicate to the Corinthians that those who believe the Law still applies are our “weaker brothers and sisters” (1 Corinthians 8:11).

Paul is indicating that if you are still wanting to live under parts of the Law, you may be spiritually immature rather than morally superior.

Many Evangelicals claim that at least the Ten Commandments are still supposed to be followed. This position is evidence of gross ignorance of how God’s covenants actually work. The Ten Commandments were a sign from God of the covenant between himself and Israel.

Then the Lord said to Moses, “Write down these words, for in accordance with these words I have made a covenant with you and with Israel.” Moses was there with the Lord forty days and forty nights without eating bread or drinking water. And he wrote on the tablets the words of the covenant—the Ten Commandments.
Exodus 34:27-28

Paul clearly states that he is not under the Law. Yes, you read that correctly. Paul is not under the Law (this means you aren’t either). Colossians 2:17 refers to the Law as a shadow of what was to come in Jesus (Hebrews 10:1). Hebrews 7:18-19 says the Law is set aside because it is weak and useless. One verse even says that the Law is abolished:

For he himself [Jesus] is our peace, who has made us both one and has broken down in his flesh the dividing wall of hostility by abolishing the law of commandments expressed in ordinances…
Ephesians 2:14-15 (ESV)

But didn’t Jesus say “I didn’t come to abolish the law but to fulfill it?” 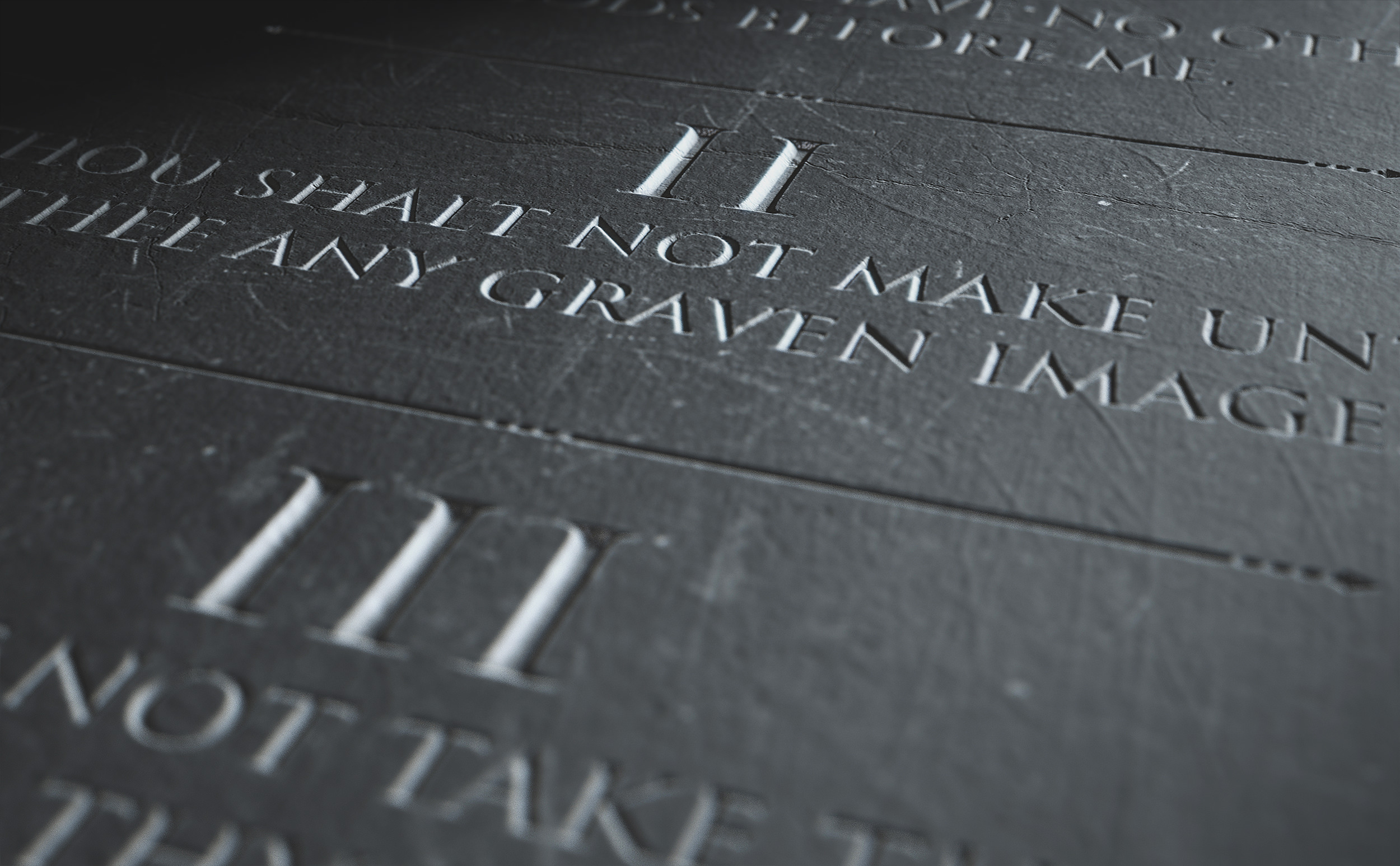 Do not think that I have come to abolish the Law or the Prophets; I have not come to abolish them but to fulfill them. For truly I tell you, until heaven and earth disappear, not the smallest letter, not the least stroke of a pen, will by any means disappear from the Law until everything is accomplished.
Matthew 5:17-18

The Gospel account according to Matthew was a book mainly written for the early Church in Israel who were Messianic Jews. They had concerns that most other Christians didn’t share, such as Christ’s genealogy and what to do with the Law. So even though Paul says the Law is abolished, Jesus says that he didn’t come to abolish it. Rather, he says he came to fulfill the Law. What does all this mean?

Let’s take a look at the two words that Jesus uses: abolish and fulfill. Abolish means, “to annul, formally put an end to.” Fulfill means, “to finish, bring to completion.” Both of these words mean to bring something to an end. The difference is describing how it got to that end. If Jesus came to abolish the Law it could mean that he put a stop to it prematurely. Instead, Jesus came to end the Law by finishing it, by bringing it to its completion. The Law has ended because it has met it’s intended and natural end (John 17:4, 19:30). Jesus came to fulfill it… it is brought to its completion. Fulfilled and abolished functionally get one to the same place: the Law is over.

If you are led by the Spirit, you are not under the law.
Galatians 5:18

For sin shall no longer be your master, because you are not under the law, but under grace.
Romans 6:14

The Way of Jesus

Seconds before Jesus died on the cross he said, “it is finished.” The Law is over—it was brought to the natural ending point with Christ’s death on the cross. Thus, the Law is no more in the life of a Christian. Remember how Jesus said the Law would disappear? The author of Hebrews states that the old covenant (Old Testament) is “obsolete and outdated will soon disappear” (Hebrews 8:13). Obsolete and outdated. It will soon disappear. “Soon” for the author of Hebrews means 2,000 years ago for us. The Law disappeared 2,000 years ago.

He has made us competent as ministers of a new covenant—not of the letter but of the Spirit; for the letter kills, but the Spirit gives life.
2 Corinthians 3:6

The “letter” is the Law, and it kills. It kills spiritually and it kills physically. Paul says you have “died to the law through the body of Christ” and “by dying to what once bound us, we have been released from the law so that we serve in the new way of the Spirit, and not in the old way of the written code.” (Romans 7:4, 6). God doesn’t want us to live under the Law. Does all this mean we’re free to live however we want? No, not at all. In one of Paul’s letters to the Corinthians, he says, “I myself am not under the Law” but then he clarifies what he means, “Well, I am under a law–I’m under the Law of Christ” (1 Corinthians 9:19-21).

Carry each other’s burdens, and in this way you will fulfill the law of Christ.
Galatians 6:2

If you’re a Christian, you’re not under the old Law, but a new one: the teachings of Jesus. You can find these teachings in the four Gospel books of the New Testament, just look for the words in red. Everything that he said, according to Jesus, can be summarized in “love God” and “love everyone else, too.” (Matthew 22:37-40). That is the Law of Christ.

It is really that simple, it just happens to be the most difficult thing.