The Bible is the story of God leading humanity out of darkness and into the light. One massive overarching theme that we can see in Scripture is that God has been slowly moving his people further away from sin and closer towards his ideal.

For the law was given through Moses; grace and truth came through Jesus Christ. No one has ever seen God, but the one and only Son, who is himself God and is in closest relationship with the Father, has made him known.
John 1:17-18

So, with the arrival of Jesus, it was finally time to set the record straight. God came to us in the flesh to say “enough is enough.” No more misinterpretations, no more accommodations, no more concessions. And while there were quite a few things Jesus set the record straight on, we’ll be looking at three major ones and how they were foreshadowed in the Old Testament.

In this second article of a series called “Enough is Enough” we’ll be looking at temples in the Old Testament and how God never wanted them in the first place.

The Jewish people worshiped at their temple for hundreds of years before Jesus came on the scene. It was the center of their worship system. But before there was ever a temple there was a Tabernacle. The Tabernacle, meaning “residence” or “dwelling place,” was the portable earthly dwelling place of God among the children of Israel from the time of the Exodus out of Egypt, through the conquering of the land of Canaan. It was basically a tent.

In contrast to the Tabernacle, the Temple wasn’t initiated by God, wasn’t asked for by God, and wasn’t described by God. The Temple was said to have “great magnificence and fame and splendor” (1 Chronicles 22:5, 1 Kings 8:13), which sounds great until you compare it to what God actually asked for in the descriptions of the Tabernacle, which are much more humble. The Tabernacle wasn’t supposed to be magnificent or splendorous. God instructed the Israelites to not even use tools to shape the stones because clearly, his desire was to have a simple dwelling place that was set apart from the extravagant temples of pagan gods in surrounding lands (Deuteronomy 27:5-6, Exodus 20:25, Joshua 8:30-31). Israel maintained the Tabernacle for a long time, but by the time of king David, Israel would increasingly stop listening to God’s will. 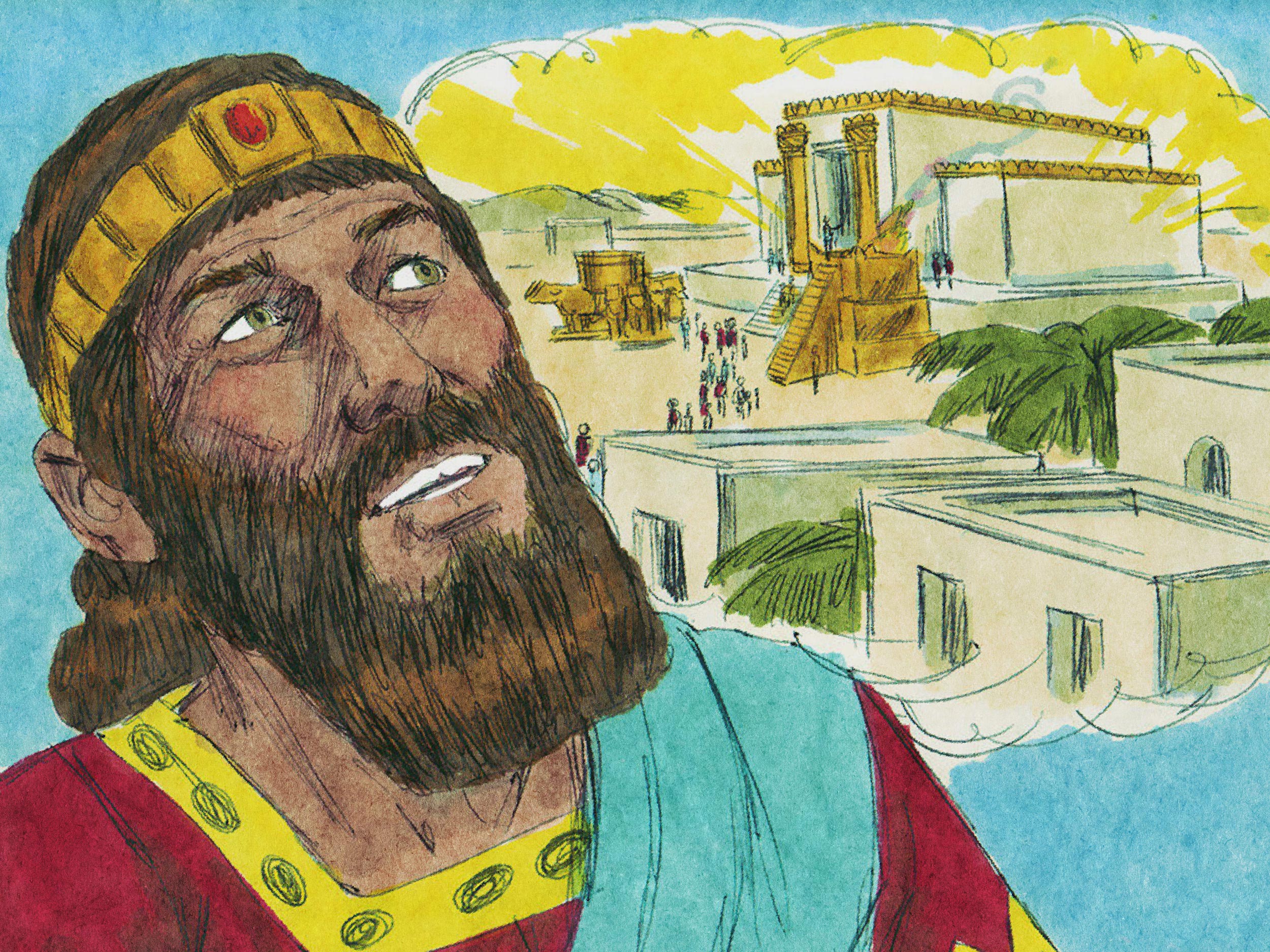 2 Samuel 7 begins with an account of David remarking on his guilt that he lives in such a lavish palace, but the Ark of the Covenant remains in a tent (the Tabernacle). The origin of the idea to build God a temple starts here. David’s prophet, Nathan, tells David, “Whatever you have in mind, go ahead and do it, for the Lord is with you.” But that night the Lord spoke to Nathan in a dream, explicitly telling him to warn David that he was “not the one to build me a house to dwell in” (1 Chronicles 17:4). God says that a temple is not needed and that he has never asked for such a thing.

Go and tell my servant David, ‘This is what the Lord says: Are you the one to build me a house to dwell in? I have not dwelt in a house from the day I brought the Israelites up out of Egypt to this day. I have been moving from place to place with a tent as my dwelling. Wherever I have moved with all the Israelites, did I ever say to any of their rulers whom I commanded to shepherd my people Israel, “Why have you not built me a house of cedar?”
2 Samuel 7:5-7

What comes next is key. God goes on to say that it is his desire that he himself build a house [temple] and that it will be his son, Jesus.

The word “house” is referring to a dwelling place for God. The Lord indeed built a dwelling place for himself: the Church. All over the New Testament, we are told that the Church, the people in Christ, are God’s temple and therefore his dwelling place (1 Corinthians 3:16-17, 2 Corinthians 6:16, 6:19; 1 Peter 2:5, Ephesians 2:19-22). Long after David died, just like in Nathan’s prophesy, his descendant established an eternal kingdom. The descendant of David was Jesus, God’s son, and he indeed established an eternal kingdom—the Kingdom of God.

Unfortunately, David makes several key misinterpretations (1 Chronicles 28:5-7). Instead of God allowing himself to build the “house”, David and Solomon build one. Instead of waiting for God to raise up one of his descendants after he died, David appointed his already living son, Solomon, to build a temple. Instead of letting God use his son to build a “house”, David appoints his own son to build a temple (1 Chronicles 22:7-10). God never called Solomon, a man who worshiped pagan gods, His son. David, who already had his mind up before any of this, thought that “house” meant a cedar and stone temple, much like all the other pagan cultures had for their gods to dwell in. Finally, Solomon’s kingdom would not be an eternal one—his kingdom ended spectacularly when the Israelites were thrown into Babylonian exile.

Even though God clearly tells David not to build a temple (1 Chronicles 17:4), he does it anyway.

The contents of David’s preparations for the temple are extensive (1 Chronicles 22:2-19). David planned out every detail down to the exact weight of every decorative item. He funded the entire construction project, created the exact blueprints, and even gathered all the materials needed (1 Chronicles 28:11-18). Finally, David also picked out the exact location that his temple would be built (1 Chronicles 21:24-26). David knew that God forbade him from building a temple, but because he mistakenly believed that his son would be able to build it, he prepared so extensively that Solomon could carry out David’s will exactly as he envisioned it.

Despite the fact that today we call the building “Solomon’s Temple”, Solomon really had nothing to do with it. Even though David was told that a “house” would be built by God’s son, not David’s son, and that it wouldn’t be built until after his “days are over and he rests with his ancestors,” David wasn’t able to wait—he himself gave the order to start construction of the temple (1 Chronicles 22:19).

The first temple was not God’s will but was the product of David’s flesh. 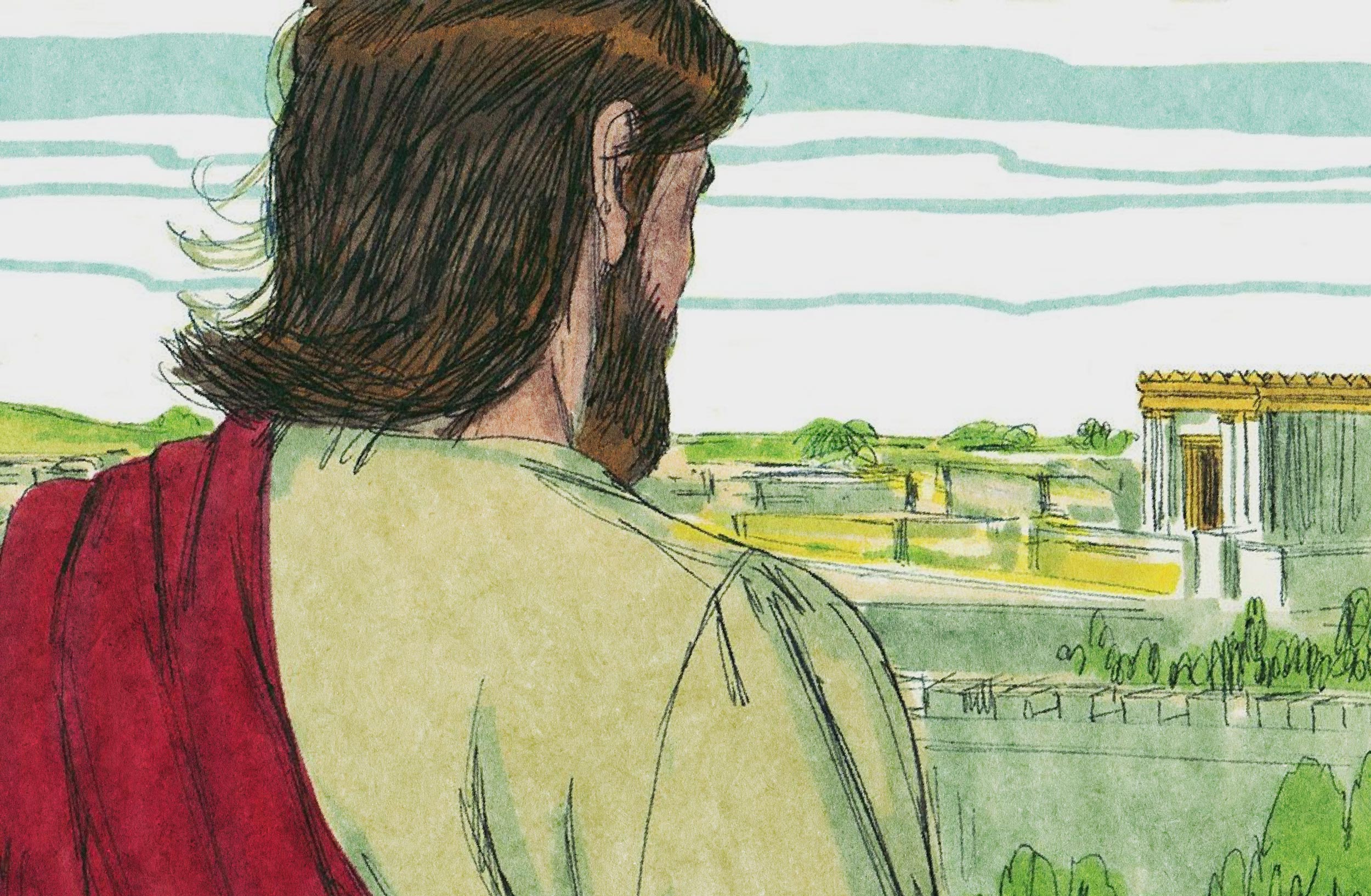 David’s temple, being the result of his flesh and misunderstandings, did not enjoy the protection of God. Roughly 30 years after it was built it was completely ransacked by a foreign king (1 Kings 14:25-26). Foreign gods were worshipped and child sacrifices were made in the temple (2 Kings 21:3-6). It was completely destroyed by the Babylonians in 586 BC and rebuilt 70 years later. Jesus prophesied that the temple would once again meet its destruction sometime within a generation and he was correct. Clearly, God does not care about a temple building.

Scripture says that the Law (including the Old Covenant and the Temple) was “weak” and “useless“, made “obsolete” and would soon “disappear” (Hebrews 7:18, 8:13). Jesus brought on the New Covenant which replaced the Old. The temple, part of God’s Old Testament concessions, would meet its fate in a few decades, but God clearly wanted to make a statement sooner than that. In the temple was a curtain that separated the “Holy of Holies” (the former place of God’s presence) from the rest of the building. At the moment of Christ’s death, that curtain was torn in two from top to bottom. Now the way into the Holy of Holies was open for all people, for all time. When Jesus died, the curtain was torn, and God moved out of that place never again to dwell in a temple made with human hands (Acts 17:24). God was through with temples and their religious system.

The book of Hebrews explains how Jesus is now our only way to God’s presence (Hebrews 10:19-20). The author of Hebrews makes great pains to link Jesus back to the Old Testament but he never uses the Temple to do this, instead, he always uses the Tabernacle (8 times), saying, “the true tabernacle [is] set up by the Lord, not by a mere human being” (Hebrews 8:1-2). The prophet Amos is quoted by James where he says that it would be the Tabernacle that would be rebuilt, not David’s temple (Acts 15:15-18).2

Stephen, while preaching to the Israelites, moments before he was murdered by them, said that the Temple was David’s idea, that it was a result of resisting the Holy Spirit, and that God “does not live in houses made by human hands” (Acts 7:44-51). Today there is no Jewish Temple in existence. God allowed for the existence of a temple building but now we know, through the New and the Old Testament, that God wanted to build his own Temple. That Temple, we are told, is Jesus Christ and his body of believers (John 2:19-22; Matthew 12:6; 1 Corinthians 3:16-17; Ephesians 2:19-22; Revelation 21:22). If Jesus himself and his followers are the True Temple of God, then that means that the Israelite building, modeled after pagan worship, was the False Temple.

The promise that God made to David all those centuries ago was fulfilled in Jesus. David didn’t listen to God, but Jesus came anyway and established his true Temple. God never wanted a Temple building. He put up with it for a time, but now with Jesus, it is done away with once and for all. Enough is enough.