Renewed Creation God chooses to restore rather than destroy.

There is a widely held belief in popular mainstream Christianity that God will destroy the Earth one day. This belief pairs well with the idea of a Rapture and a future Tribulation, because Christians can escape the planet as it supposedly gets worse. This isn’t what scripture teaches though. God doesn’t abandon his creation, he restores it. This is the great hope of the Gospel.

For the creation was subjected to frustration, not by its own choice, but by the will of the one who subjected it, in hope that the creation itself will be liberated from its bondage to decay and brought into the freedom and glory of the children of God.
Romans 8:20-21

At the end of this age, the book of Revelation paints a beautiful picture of Heaven coming down so that God can dwell among the people of Earth (Revelation 21:2-4). “He will wipe every tear from their eyes. There will be no more death or mourning or crying or pain.” The Kingdom of God that Jesus inaugurated will then encompass the entire planet (Matthew 13:31-32).

All over scripture, there is a promise of a “new heavens” and a “new earth”. (Isaiah 65:17, 66:22; 2 Peter 3:13) It is worth mentioning that in ancient near-eastern thought, “heavens” referred to the skies and outer space, as well as the realm in which God dwells. The heavens mentioned in the following verses are very likely referring to the universe.

Then I saw a new heaven and a new earth, for the first heaven and the first earth had passed away.
Revelation 21:1

Without proper context, it is easy to see why many would understand this verse to mean that God destroys the Earth and makes a new one. That isn’t exactly what the verse says though. A good parallel is how Paul describes someone who is “born again“:

Therefore, if anyone is in Christ, he is a new creation. The old has passed away.
2 Corinthians 5:17

These two verses use the same phrases: “new” and “passed away”. Both verses are describing how God has restored creation. When using the term “new creation,” Paul did not intend to convey the idea that we become a completely different individual. There is continuity between the old person and the new person to such an extent that it remains the same person, but renovated. The person is the same, but the quality of that person has been transformed.

The term “passed away” means “to go past” or “to go away from evil”, it doesn’t mean to die or be destroyed.

The Biblical concept of the New Earth is one of renovation and restoration. Peter preached that we must repent and turn towards God “until the time comes for God to restore everything, as he promised long ago through his holy prophets” (Acts 3:19-21).

In the original Greek text, there are two words for “new”:

The first word is neo and is used to describe something that is new in time. For example, a classic car that is newly restored to its original condition could never be neo because it is not new in time. When the car was first built it was neo, but being that it is now something old (archaios) being renewed or restored, it can never be described as neo again. Neo is not the word used in the passages from Revelation 21:1 or 2 Corinthians 5:17.

The word that is used to describe the new Earth and being a new creation in those passages is kainos. Neo can only mean something made from nothing. Kainos also means new, but it is describing something that is qualitatively new or renewed. Kainos is the word that Paul uses to describe the Christian, as a new (kainos) creation. The individual Christian has not been vaporized into non-existence and newly created, rather the old (archaios) has passed away, and the new (kainos) has come.

Therefore, Revelation 21:1 is not alluding to an Earth that is destroyed and then replaced by an Earth that is newly created. It is speaking of the Earth passing from one condition to another (parachomai), being qualitatively renewed (kainos) and restored. (Romans 8:20-21). 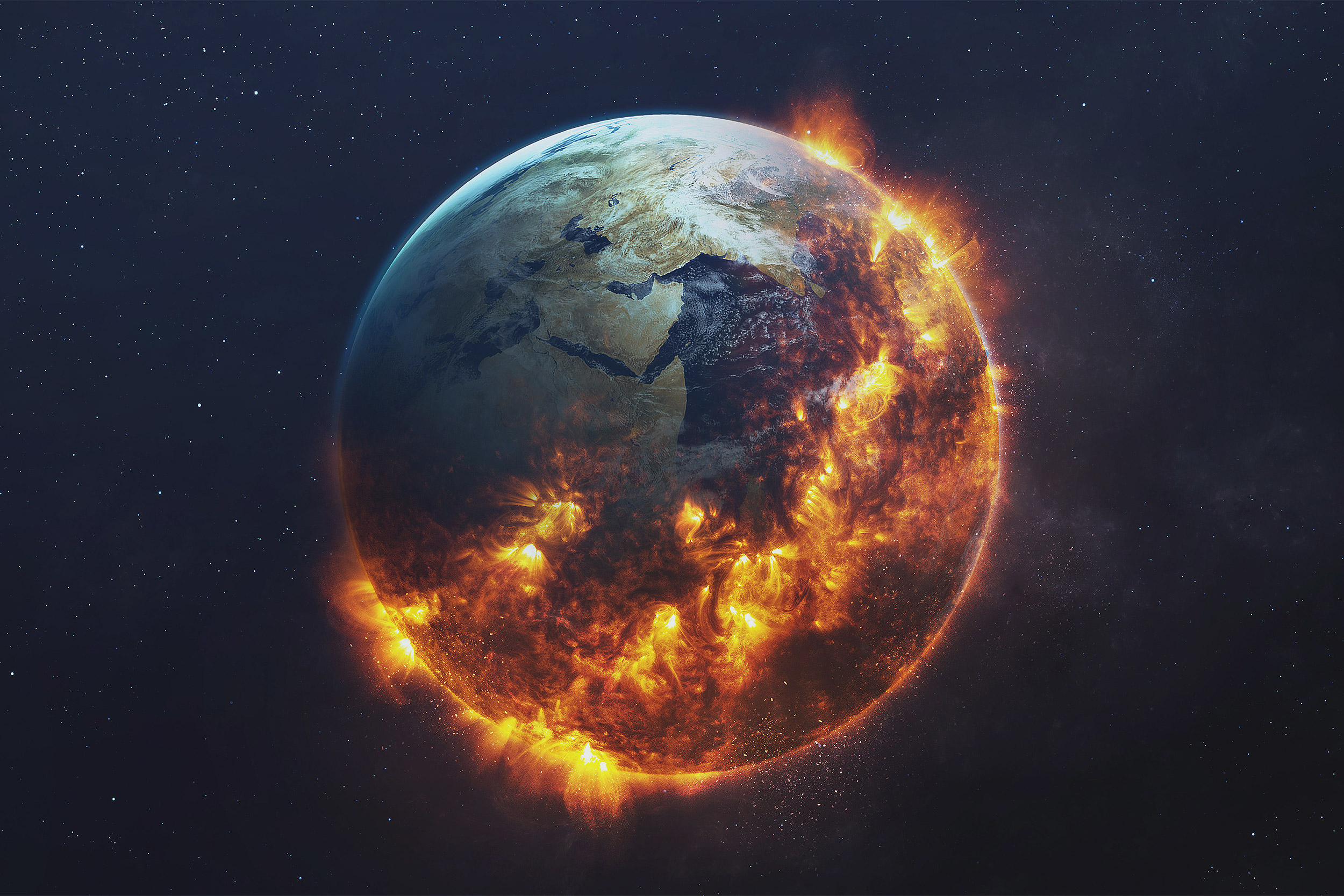 We’ve already looked at how the new Earth is, by definition, not new-from-nothing but rather renewed. This word “kainos” is in another passage in scripture that is often misinterpreted:

They deliberately forget that long ago by God’s word the heavens came into being and the earth was formed out of water and by water. By these waters also the world of that time was deluged and destroyed. By the same word the present heavens and earth are reserved for fire, being kept for the day of judgment and destruction of the ungodly… The heavens will disappear with a roar; the elements will be destroyed by fire, and the earth and everything done in it will be laid bare. Since everything [evil] will be destroyed in this way, what kind of people ought you to be? You ought to live holy and godly lives as you look forward to the day of God and speed its coming. That day will bring about the destruction of the heavens by fire, and the elements will melt in the heat. But in keeping with his promise we are looking forward to a new heaven and a new earth, where righteousness dwells.
2 Peter 3:5-13

Once again the phrase “new heaven and new earth” is describing a renewed Earth and universe. Peter, in this passage, compares a future fire to the waters of the flood of Genesis. In the flood, the wickedness was done away with but the Earth remained and the good part of it survived unscathed. Likewise, the fire being described is a refining fire, a motif common in scripture. Think of it more like a blacksmith’s fire than an incinerator.

Like the flood, wickedness is burned away while the pure remains.

“The Earth and everything in it will be laid bare.” The Greek word for this is heurisko. This choice in words is very intentional. In 3:14, Peter calls his readers to “make every effort to be found (heurisko) spotless, blameless and at peace with him,” and earlier, in 1 Peter 1:7, he says, “These [trials] have come so that your faith—of greater worth than gold, which perishes though refined by fire—may be proved (heurisko) genuine and may result in praise, glory, and honor when Jesus Christ is revealed”

What Peter is doing by saying “everything will be laid bare” and alluding to a refiner’s fire, is using a physical process to explain a metaphysical mystery—the awesome purification of the entire universe, including planet Earth. Somehow the entire cosmos is to be refined and emerge purified.

1 Corinthians 3:10-15 describes this refining fire that destroys that which is evil, but purifies what is good. Ask yourself, why would all creation be groaning for liberation from its bondage to decay (Romans 8:20-22), if it was only to be completely annihilated, literally melted with fire?

When God redeems and restores, he doesn’t destroy and make something new from nothing. Think of Christ’s body upon his resurrection. They didn’t find ashes in the tomb, they found nothing, the tomb was empty. Jesus walked around after his resurrection with a restored, redeemed, glorified body; the same body made perfect (Luke 24:39, John 20:27). God will do the same with us and the Earth.

The teaching of Scripture is that God’s plans are never defeated; he does not fail and replace. Instead, he restores and reconciles all things (Colossians 1:20). The final destination for God’s people is not going up to God in heaven, while the earth and sky are destroyed. Rather, the final destination is in a renewed world and cosmos in which God comes down to be among his people. If that doesn’t get you excited about the possibilities in our future, who knows what would.