What If Jesus Were President? The United States of Turn the Other Cheek?

Many Christians believe that America is a “Christian Nation” and pray for presidents who are Christians. On the surface, this is a nice sentiment. After all, if Jesus is Lord of our lives, shouldn’t a Christian be the President of the United States?

To find out how Jesus would run a nation, we don’t have to wonder; we can just look at his longest recorded sermon: the Sermon on the Mount (Matthew 5, 6, 7; Luke 6:17-49). In this sermon, Jesus shows us what life inside his nation would look like. Between his teachings and his example, we can learn a lot about how he would run a nation.

So our “what if” experiment begins: what would America look like with Jesus as President?

A Jesus Way of Running a Nation

Jesus, the most Christ-like person in existence, would likely make a few changes once he stepped into the Presidential office. After all, Jesus said a lot of crazy things— blessed are the meek, the merciful, the peacemakers. Let’s take a look at a small sampling of his most famous sermon to get a glimpse of the changes he would try to make.

Blessed are you who are poor, for yours is the Kingdom of God. But woe to you who are rich, for you have already received your comfort.
Luke 6:20, 24

No longer would the rich be able to hold onto their wealth; the poor would now be blessed. He would instruct us to give away our belongings and provide for the poor (Acts 2:45). To the richest, he would instruct them to give away everything they own (Matthew 19:21). Jesus would tell us to distribute our wealth. All of America’s resources would be diverted to feeding, clothing, and housing the poor.

You have heard that it was said, ‘Love your neighbor and hate your enemy.’ But I tell you, love your enemies and pray for those who persecute you, that you may be children of your Father in heaven.
Matthew 5:43-45

These funds being diverted for the poor would mean that our expensive military would have to be dismantled. We would have no need for it anyways since he would shockingly tell us that we must love our enemies instead of kill them (Matthew 5:43-45). Yes— abortion, capital punishment, and war would be abolished (read more here). Americans would cry out, “we must have a military!” but Jesus would remind us that if we are a Christian Nation, a military would be forbidden.

Before you know it, Jesus would ban the Pledge of Allegiance. He would inform the nation that a pledge is forbidden (Matthew 5:33-34, 37). All this would present quite a problem for those in Washington D.C., and even we may begin to second guess if we really want Jesus as our President. 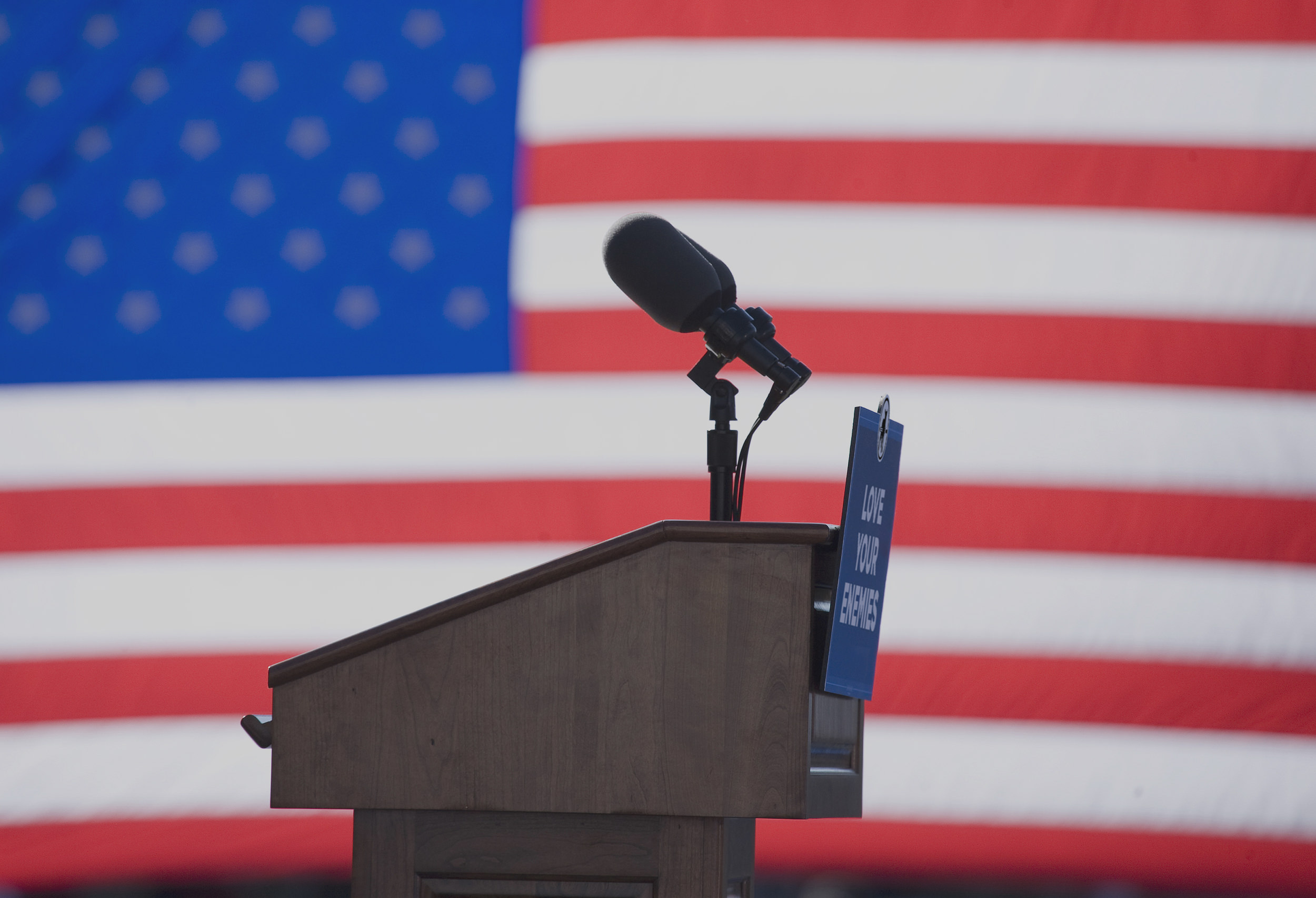 Some Christians admit that they aren’t so much concerned with having a President that is a Christian; they would rather have a non-Christian who is competent and qualified. Most likely, this is because they believe in the systems of power on which empires rely. They may not actually believe in the Jesus-way of running the world.

We must remember that by becoming a “Christian” we are claiming that Jesus is King and his ways are the best ways—for everyone!

So what hope is there that someone like Jesus will ever become President? Well, the Bible says that Satan holds power and authority over all the nations, including America (Luke 4:5-7). All over Scripture, we are told that the devil rules the world (1 John 5:19; Ephesians 2:2; John 12:31, 14:30, 16:11). So despite wishes for the United States to be a “Christian Nation,” it can never be.

The reality is that a nation built on violence, slavery, and genocide cannot survive without it. Ironically, empires of the world also always cause their own destruction (Matthew 26:52). If you look around to see if the Roman Empire still exists, you won’t find it. Every empire falls, and all their citizen’s patriotism for their country ended up being misplaced. There is only one nation that will never fall.

Empires (like America) and Christ’s nation (the Kingdom) are not compatible. The two are rival nations that work at cross purposes.

Jesus stands with an outstretched hand and begs us to abandon our current allegiances and become citizens of his nation.