War Is Satanic The unavoidable truth about the way of the sword.

War is hell. The effects of being in war have life-long repercussions. Soldiers who come home from the battlefield are changed forever. Many suffer from various psychological disorders after seeing combat. More U.S. Veterans killed themselves in 2014 alone than all who died in Iraq and Afghanistan to date. Those in the military are six times more likely to commit suicide.

War forces human beings to interact with others in a way that we weren’t made for. War takes us outside of God’s plan and into Satan’s domain of death. War is hell because it runs counter to the way of Jesus.

War exists because Satan exists. Satan’s number one goal is to counter God’s will. God doesn’t want anyone to perish, therefore Satan wants everyone to. Satan wants to kill everyone. War is the most overt way that people are tricked into following Satan’s will.

The thief [Satan] comes only to steal and kill and destroy; I have come that they may have life, and have it to the full.
John 10:10

How Much Is A Persons Life Worth?

God could not possibly love us more than he actually does, and we could not matter more to God than we actually do. It’s no wonder that Paul declared that God’s love for us in Christ “surpasses knowledge” (Ephesians 3:18-19). Knowing this explains why Satan’s goal of destroying people is such a major trespass to God’s will.

God doesn’t want people to die, which is why he offers life that defeats death. You could argue that Death is God’s chief enemy even more so than Satan himself. After all, scripture says that Death is the last enemy to be defeated (1 Corinthians 15:26). Nevertheless, we are told that Satan himself holds the power of death.

Since the children have flesh and blood, he too shared in their humanity so that by his death he might break the power of him who holds the power of death-that is, the devil- and free those who all their lives were held in slavery by their fear of death.
Hebrews 2:14-15

The verse here claims that those who fear death are slaves to Satan. Thankfully Jesus came and died for the explicit purpose of destroying death (1 John 3:8). We who are in Christ no longer need to be fearful of it (John 8:51, 1 John 4:18).

The God of This World

Satan is the ruler and god of this world; Scripture makes this abundantly clear (John 12:31, Ephesians 2:2, 2 Corinthians 4:4, 1 John 5:19). He commands all nations and their governments (Luke 4:5-6). He raises up corrupt leaders (Daniel 8:25) who deceive the masses because they are themselves deceived (2 Timothy 3:13). He craves death, (John 8:44, Hebrews 2:14-15) and wars are a major means of satisfying this lust. These facts highlight how powerful and radical Christ’s message of peace and non-violence was in a world drowning in death. Jesus came with the cure for the world.

No matter what nation you live in, if it has a military, the government commands its soldiers to kill their enemies. This is the foundation of war; kill before you yourself are killed. Kill to protect, kill to conquer, kill to survive, it doesn’t matter. Kill or be killed. It’s us or them. World War II saw a primarily Christian army (Germany) killing another primarily Christian army (United States). Patriotism can be a dangerous thing. Unfortunately, violence is still viewed today as a legitimate way of shaping our world, all in an outright betrayal of Jesus Christ and his revolutionary ideas. 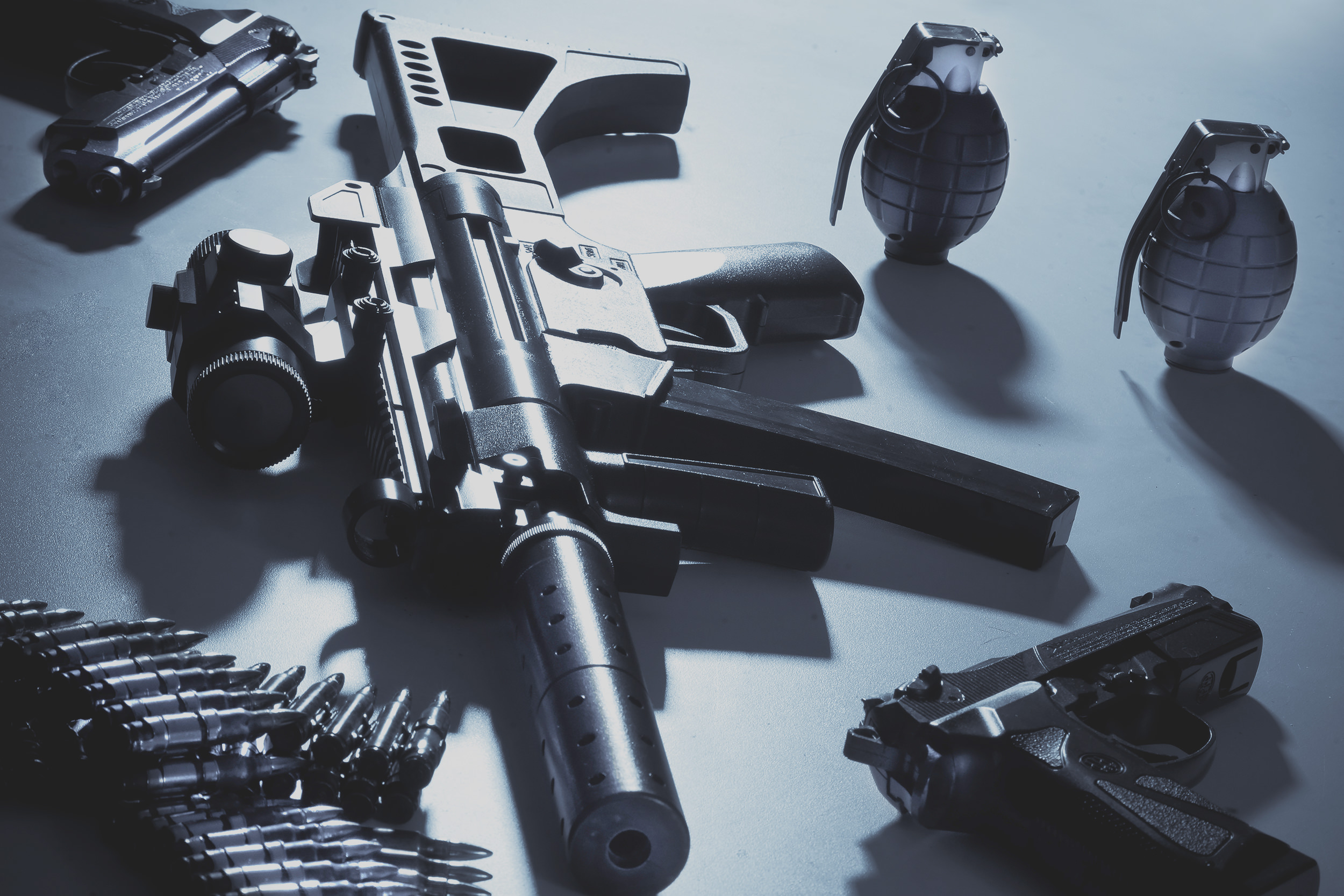 The Prince of Peace

The world which is run by Satan says, “yes, it is lawful to kill your enemies. Doing so will bring your nation great honor; you will be awarded medals and be celebrated.” Meanwhile, God comes to earth in the flesh and defies Satan, saying, “to those who will listen, love your enemies, do good for them, pray for them. Doing so will allow you to be one of my children.” (Luke 6:27-28, Matthew 5:43-45)

No one can serve two masters.

Jesus offers a radical new way of life that runs counter to the ways of the world. If we follow Him, we may end up being mocked by the world. Even one of the disciples didn’t understand the way of Jesus:

Jesus began to explain to his disciples that he must go to Jerusalem and suffer many things… and that he must be killed. Peter took him aside and began to rebuke him. “Never, Lord!” he said. “This shall never happen to you!” Jesus turned and said to Peter, “Get behind me, Satan! You are a stumbling block to me; you do not have in mind the concerns of God, but merely human concerns.” Then Jesus said to his disciples, “Whoever wants to be my disciple must deny themselves and take up their cross and follow me.”
Matthew 16:21-24

The path of the Christian is one of self-sacrificial love, not violence or killing. Killing is not how Jesus achieves his mission and it isn’t how we do either. If Christians shouldn’t kill, then Christians in the military shouldn’t kill. One’s vocation doesn’t change the ethical standard given by Christ. Jesus’s Sermon on the Mount transcends all vocations. (read more here)

Jesus uses the word “fool” to describe those who participate in war against his commands (Matthew 5:43-45, 7:26). That goes for people who have heard Christ’s teachings, but what about those who haven’t? Those who don’t have ears to hear the message of Jesus continue to be deceived. 2 Corinthians 4:4 says that Satan has blinded those who don’t follow Jesus so they cannot understand the concept of loving ones enemy and refusing violence. Concerning Christians, Paul illustrates this even further when he explains that human beings aren’t even our enemies.

Wherever you see war or violence you are witnessing people being deceived by the dark spiritual forces at work in this world.

When a Christian picks up a weapon of war they model the prophet Muhammad more closely than they model the prophet Jesus. This is an inescapable fact that many would rather not accept. You cannot find one passage or phrase in the teachings of Jesus that can support war or killing of any kind. Jesus taught quite the opposite of these things. If you support war or killing, you are at odds with Christ.

The War of the Lamb

The position of a Christian concerning warfare isn’t just to not serve, but rather to recognize that we don’t fight the physical, we fight the spiritual. The physical is never our enemy to begin with. Even if someone is actually carrying out evil, we need to recognize they are in bondage to sin, and that Jesus still loves them. To Jesus, even the worst of sinners have unsurpassable worth. After all, weren’t we all enemies of God and evildoers at one point? Christians with this knowledge have no right to take anyone’s life. Only after we realize this can we advance the Kingdom of God in love for all people.

In Jesus, we see a God who would rather die for his enemies than kill them. We are to model this.

For though we live in the world, we do not wage war as the world does. The weapons we fight with are not the weapons of the world.
2 Corinthians 10:3-4

Christians wage war by emulating Jesus. Christians absorb evil and forgive, instead of retaliating and giving evil new life as revenge. Why was Jesus crucified? Because he didn’t support war. The Jews wanted a warrior, so they chose to crucify Jesus and let Barabbas (a violent freedom-fighter) free instead. Christ made it clear on the cross that war will no longer be the way the world is transformed. The cross exposes the use of violent force as a shameful practice to be renounced. Yes, Jesus has abolished war. The King of Kings won his Kingdom without war. Jesus proved there is another way.

Jesus is the other way. The question, “what are you willing to die for?” is not the same question as “what are you willing to kill for?” Jesus was willing to die for that which he was unwilling to kill for. Jesus won his Kingdom by dying, not killing. Ruling the world by killing was buried with Christ. When Christ was raised on the third day, he did not resurrect war. With his resurrection, the world is given a new trajectory, one toward peace.

The early church understood this. The issue of killing was prohibited in every mention by early church writers. Whenever the issue of military service and warfare was discussed, Christians were prohibited from participating. Nowhere in the written record in the first three hundred years of Christianity is killing ever justified. Not even for soldiers.

Today, Christians view war with acceptance the way they used to view slavery before it was abolished. In the future, Christians will view wars as horrible mistakes in the same way we view slavery today.

Let’s work towards that future now.