Christians Can’t Be In Government What Jesus can teach us about involvement with empire.

Every four years in America, you’ll find at least one presidential candidate running on a platform that includes some sort of “Christian values.” If the term “Christian” actually means what it means—being like Jesus Christ—then no president in the history of America was ever a Christian. A bold claim, yes, and it doesn’t apply only to just presidents.

There are majorly essential reasons why no Christian can work in the government, ever. These reasons were very apparent to the early Church, who knew that participation in government was tantamount to treason when it came to their allegiance to God’s Kingdom. It was the Church’s acceptance of political power in the fourth century that plunged the movement into paganism for hundreds of years. Today, along with much of history, this truth has been buried so that popular Christianity can continue to be co-opted by Satan’s structures of power.

Christians, by the definition of the term, follow Jesus in emulating his life and his teachings. If any Christian were to participate in government, they would cease to be “Christian” if the term were to possibly retain any semblance of meaning. Jesus taught that participation in government is antithetical to his will. This claim will likely need some convincing evidence. Let’s go.

The Options Laid Before Jesus

When Jesus began his ministry, his goal was to change the world. He wanted to bring truth and life to every person. He came to usher in his Kingdom—his nation. Jesus, being God in human form, could accomplish this goal in any way he wanted.  When choosing a means to change the world, like most American Christians today, political power was certainly an option on the table for Jesus. He could have participated in politics, he could have worked his way into governmental authority, but he didn’t choose this. In the end, he chose the way that aligned with his Father’s will (which was not participation in government). This should be enough evidence on its own, but there is so much more.

All the Nations of the World

The entire world knows what the highest form of power a human can achieve is: political power. Political power gives human beings the ability to rule and control other humans. Politics form a power structure that has been invented in our minds that bring justification for a few people ruling over many people. Political power is a system that was created and has been maintained by none other than Satan himself, in defiance of God’s will.

The devil led him up to a high place and showed him in an instant all the nations of the world. And he said to him, “I will give you all their authority and glory; it has been given to me, and I can give it to anyone I want to. If you worship me, it will all be yours.”

Jesus answered, “It is written: ‘Worship the Lord your God and serve him only.’”
Luke 4:5-8

The reason why Jesus refused Satan’s offer may seem obvious but maybe it isn’t as obvious as you think. Yes, Jesus obviously refused to worship Satan, but let’s dissect the implications here. According to Jesus: the conditions for having political power is to worship and serve Satan. This bears repeating: in order to have political power, which belongs to the devil, you must worship and serve him. Political power and authority belong to Satan, and in order for him to give it to anyone, they must worship him.

Debate Over with 3 Points

Third, Jesus did not dispute Satan’s claim to control all the nations of the world. Jesus wouldn’t dispute this claim because he knew it is true. Jesus confirms Satan’s claim to control all the nations of the world when he repeatedly calls him “the prince of this world” (John 12:31, 14:30, 16:11). Paul calls Satan “the god of this age” and John says that “the whole world is under the control of the evil one” (2 Corinthians 4:4, 1 John 5:19). The only way that this temptation was real is for Satan’s claim of ownership over the governmental political power of every nation on earth to be completely valid. That means that the temptation for people to work in government and obtain political power is real. The only way for any person to work in a government that affords them any political power is to worship and serve Satan—which is succumbing to his temptation.

Jesus rejected this temptation because he knew that there was absolutely no possible way to wield political power in a way that doesn’t require worshipping Satan, serving Satan, and utilizing the system that Satan created and rules over. Satan wants people to work in governments. You should be convinced by now, but if not, we’ll keep going. 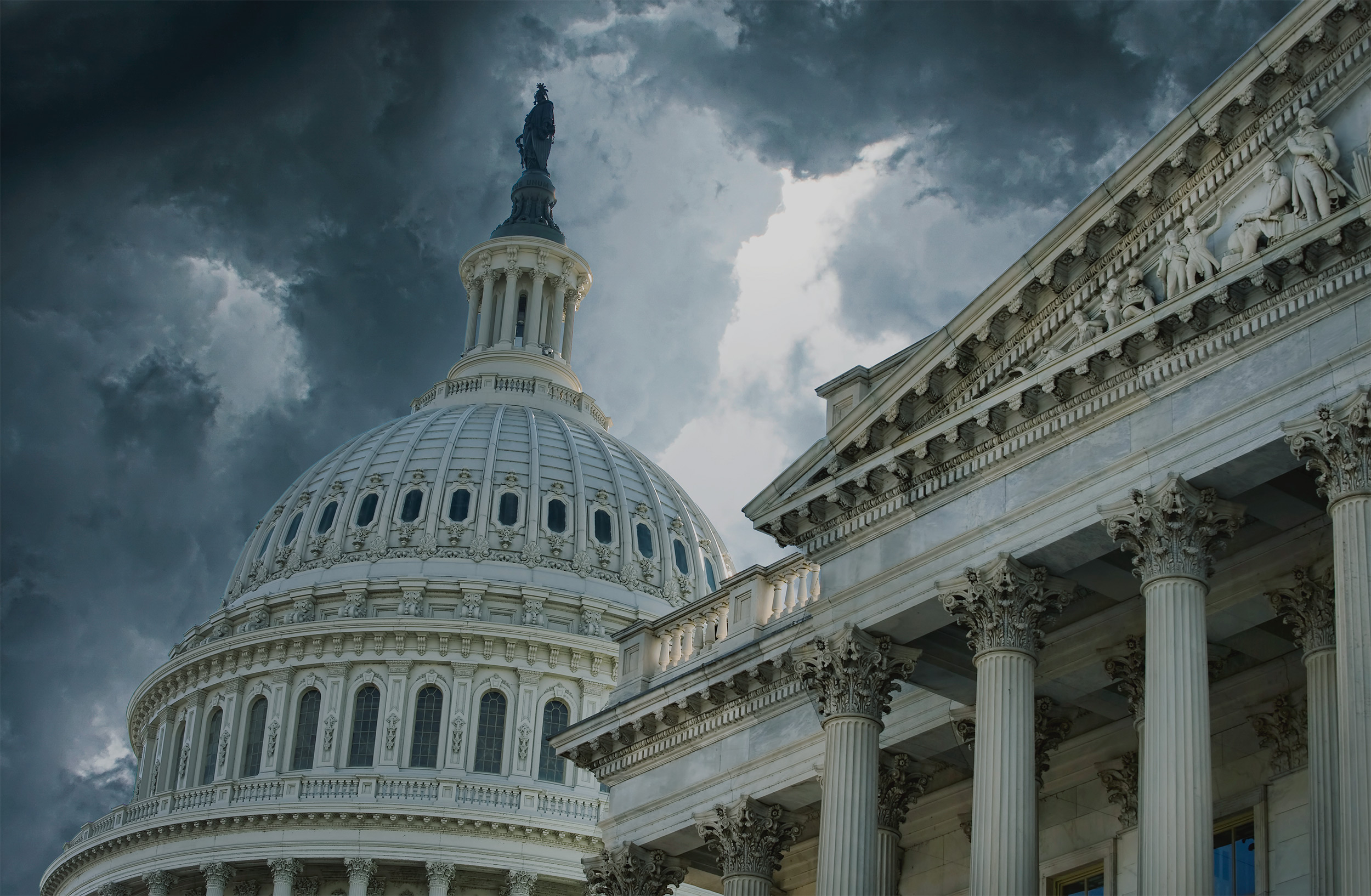 “If only we could vote a Christian into the White House, we would have the power to change the nation.” Contrary to this type of thinking, Jesus shows us that a true Christian would never allow themselves to become president. When Jesus fed the 5,000, the people wanted to make him their king (John 6:14-15). Christ’s response? He withdrew to a mountain to be by himself. Make no mistake, Jesus was eventually going to be crowned as King, but the 5,000 did not know what type of king Jesus would be. The 5,000 wanted a king that would slay their enemies but Jesus would be a king that would suffer and die for their enemies.

Christ’s own disciples shared this misunderstanding. When James and John asked Jesus who among them would have the most political power in his kingdom, he rebuked them (Matthew 20:25-28, Mark 10:35-45, Luke 22:24-30).

Jesus called them together and said, “You know that those who are regarded as rulers of the Gentiles lord it over them, and their high officials exercise authority over them. Not so with you. Instead, whoever wants to become great among you must be your servant, and whoever wants to be first must be slave of all. For even the Son of Man did not come to be served, but to serve, and to give his life as a ransom for many.”
Mark 10:42-45

Jesus tells us two vitally important things here. First, by saying “those who are regarded as rulers” he insinuates that worldly rulers are invalid. This, of course, is because Jesus is the one rightful ruler of humanity. He didn’t have to use the phrase “those who are regarded as rulers” but he does, indicating that he doesn’t regard them as valid rulers. Second, he says in terms of exercising authority over others, “not so with you.” This is the primary message in his rebuke. Jesus is saying that the world exercises authority over others but this isn’t the way for citizens of the Kingdom of God. Instead, they have to become a servant without any authority.

Christ’s nation is so fundamentally different than nations of the world. His nation is advanced by embodying his truth, not by utilizing violence, politics, or any other human power. Instead of ruling through politics, Jesus tells us we must become servants. Instead of trying to change society by forcing our will on others through legislation, Jesus tells us to influence through self-sacrifice. Instead of trying to change things from the top, Jesus tells us we must change things from the bottom. His lesson is simple: don’t control, instead, serve others.

The underlying problem is not which person sits on the throne; the problem is that there is a throne to sit on. No human has the right to rule over another human; and no constitutions, majority rule, or delusions of democracy can change that. God created a world in which humans ruled over the world, but not over each other. In the Old Testament, when the Israelites wanted a king, God said that it was a rejection of him (1 Samuel 8:6-7). He gave explicit warnings of disaster that would come if humans were to rule over other humans in the form of government (1 Samuel 8:11-18). Christians should never be a part of government—but more importantly—Christians should never want any human to hold political authority and power. Political power is a rejection of God.

The rulers will be cast from their thrones, and the lowly will be lifted up. The hungry will be filled with good things, and the rich will be sent away empty.
Luke 1:52-53

According to Scripture, America is not your nation; Christ’s nation is. According to Scripture, you are a foreigner in America (Hebrews 11:13; 1 Peter 1:17, 2:11). Your citizenship isn’t in America; it is in God’s Kingdom (Philippians 3:20). Christians do not belong to any nation of the world, so they should never seek political power in them. Instead, our focus must be on our nation and our King.

Before him all the nations are as nothing; they are regarded by him as worthless and less than nothing.
Isaiah 40:17

Anyone who chooses to be a friend of the world becomes an enemy of God.
James 4:4

Anyone who has any power in human government has it because it has been given to them by Satan. Satan doesn’t give this political power away for free—he demands worship and service (Luke 4:6-8). No one in government has any power unless they have worshipped and served Satan. You might say, “I know someone who works in government and they are a good person, they don’t worship Satan.” They may not know they have, but Jesus tells us this is so. The very system of power they are involved in is Satan’s playground. Government itself is the devil’s design and therefore anyone within it is automatically—by default—serving Satan and furthering his will. Remember, human government is a rejection of God’s rule. A politician’s intentions are meaningless, if they are in government, they are worshipping Satan—by participating in political power structures.

Government is violence, but Christianity is meekness, non-resistance, and love. Therefore, government cannot be Christian, and a man who wishes to be a Christian must not serve government. The sanctification of political power by Christianity is blasphemy; it is the negation of Christianity.
Leo Tolstoy

One day, Jesus will destroy all government rulers because they are his enemies (1 Corinthians 15:24-25 NLT). God is working to destroy all nations other than his own because they belong to Satan (Daniel 2:44, 1 John 5:19). It makes no sense for Christians to participate in the Satanic system of power that upholds the enemy’s nations. Jesus gave us another way. The exercise of political power consists of forcing your will, your way of life, on others. Jesus didn’t force his will on anyone—ever. Instead, he invited them to accept it voluntarily. Jesus’s kingship is defined not by his better use of political power but by his renunciation of political power, by his refusal to “lord” over others like the “rulers of the Gentiles” (Matthew 20:25-28). He controlled no territory, commanded no army, and enforced no laws. By rejecting violence in all of its forms, including political power, Jesus redefined kingship. He denationalized, demilitarized, and de-violenced it. He showed us what true power looks like—love.