Jesus appeared on the scene, offering a new way of life, a way of peace. He called his way of life the Kingdom of God. He taught us that we are to pray and work for this Kingdom to come to earth. He taught us to pray and work for his will to be increasingly done on earth as it is in heaven (Matthew 6:10). Jesus taught that his Kingdom of Peace would start small but would grow to be the biggest Kingdom in the whole world (Mark 4:30-32).

Prior to this view of a doom-obsessed end of the world, the primary belief through Church history was that the world would continue to get better and better as the Kingdom grew until Jesus returned to vanquish evil entirely. This is what the apostles taught. This is what the early Church taught. No Rapture, no 7-year Tribulation, no Antichrist, no battle of Armageddon, no conflict regarding Israel. And you won’t believe what they thought about the Mark of the Beast.

The Invention of the Doom Machine

A Rapture, a 7-year Tribulation, and a one-world Anti-Christ leader were all things that no Christian had ever heard of before the Reformation in the 1500s. In his rejection of Catholicism, Martin Luther called the Roman Catholic church the “Whore of Babylon” and the Beast, both references to Rome from the book of Revelation. In England, John Wycliffe, Martin Luther in Germany, John Calvin in France, John Knox in Scotland, Ulrich Zwingli in Switzerland, and countless others, all began preaching that the Pope was the antichrist.1 To counter this new popular belief, in 1585 a Catholic Jesuit priest by the name of Francisco Ribera published a 500-page work that placed Daniel 9:24-27, Matthew 24, and Revelation 4-19 in the distant future.2 Rather than seeing these passages as already fulfilled, now Ribera was saying they were still to be fulfilled in the future.3 This was the first teaching of its kind and was the foundation for modern western evangelical futurist end-times views.4 Historically speaking, this new belief didn’t take off right away.

Ribera’s book was actually lost for hundreds of years until, in 1826 a librarian to the Archbishop of Canterbury rediscovered and published it.5 A man named John Nelson Darby, a British evangelical preacher and founder of the Plymouth Brethren, came across Ribera’s newly resurfaced book and unfortunately took the propaganda seriously. Doom and gloom end-times beliefs kicked back into gear in 1830 in Port Glasgow, Scotland, when fifteen-year-old Margaret MacDonald attended a healing service.6 It was there she was said to have seen a vision of the return of Jesus happening in two stages: Jesus taking Christians from the Earth (eventually called the Rapture) and then returning again years later.7 Prior to this, it was a forgone conclusion that Jesus was only returning one time.

Her story was adopted and amplified by John Nelson Darby. He taught that the world would be getting progressively worse until Jesus came and secretly snatched all the Christians away. This heretical belief admonished an entire generation of Christ-followers who were busy improving society. Darby would go on to invent the idea of “dispensationalism,” which packages several fringe, yet now popular in the West, beliefs about the end-times.

During the 1830s, the Holy Spirit was clearly stirring American churches to life in what we today call the Second Great Awakening. But around the same time, Satan was also hard at work spreading false teachings. Darby’s new falsehoods were born alongside several others, such as Mormonism in 1830, Jehovah’s Witnesses in the 1870s, Christian Science in 1879, and other New Age movements around the same time. Even after making six trips to the U.S. to promote his Darbyism, Darby had little luck in swaying many people to his beliefs. Unfortunately, all that would change in roughly a hundred years.

When the Scofield Reference Bible was first published in 1909, it was the first of its kind and it would go unchallenged for nearly 50 years. It wasn’t a new translation; rather it was the KJV with custom headers and study notes in the margins. The views expressed in these notes would come to shape much of the American theological landscape, predominately through the 1960s-1990s.

Focusing heavily on Eschatology (end-times), the notes weave parts of the Old and New Testaments together, as though all were written at the same time by the same people. This is a favorite device of modern dispensationalists, who essentially weigh all scripture against the unspoken and preposterous theory that the older it is, the more authoritative it is. The borrowed ideas in the headers and notes were later popularized under the labels and definitions that have evolved into common usage today: “pre-millennialism,” “futurism,” “dispensationalism,” “Judeo-Christianity,” and most recently, the highly political movement openly called “Christian Zionism.”

When World War I began, Christian optimism took a hit, and the Scofield Reference Bible provided a pessimistic worldview that seemed prophetic. By the end of World War II, the Scofield Reference Bible was the best selling Bible in the whole nation.8 Being the first of its kind, Scofield’s Reference Bible began to shape the theology of popular Christianity in America and Europe. Many historians show how the dispensational theology of Scofield’s Bible led to Christian apathy when Hitler and Mussolini rose to power. Literature began to rapidly spread, claiming that “these men could be the antichrist; therefore, we should let them rise in power because this will lead to our soon rapture.”9 Dispensationalism promoted a “hands-off” policy regarding Nazi persecution of the Jews since they believed it was a sign of “the Great Tribulation.” Pleas from Europe for assistance for Jewish refugees fell on deaf ears because “hands-off” meant no helping hand.10 Who was behind the creation of the Scofield Reference Bible? 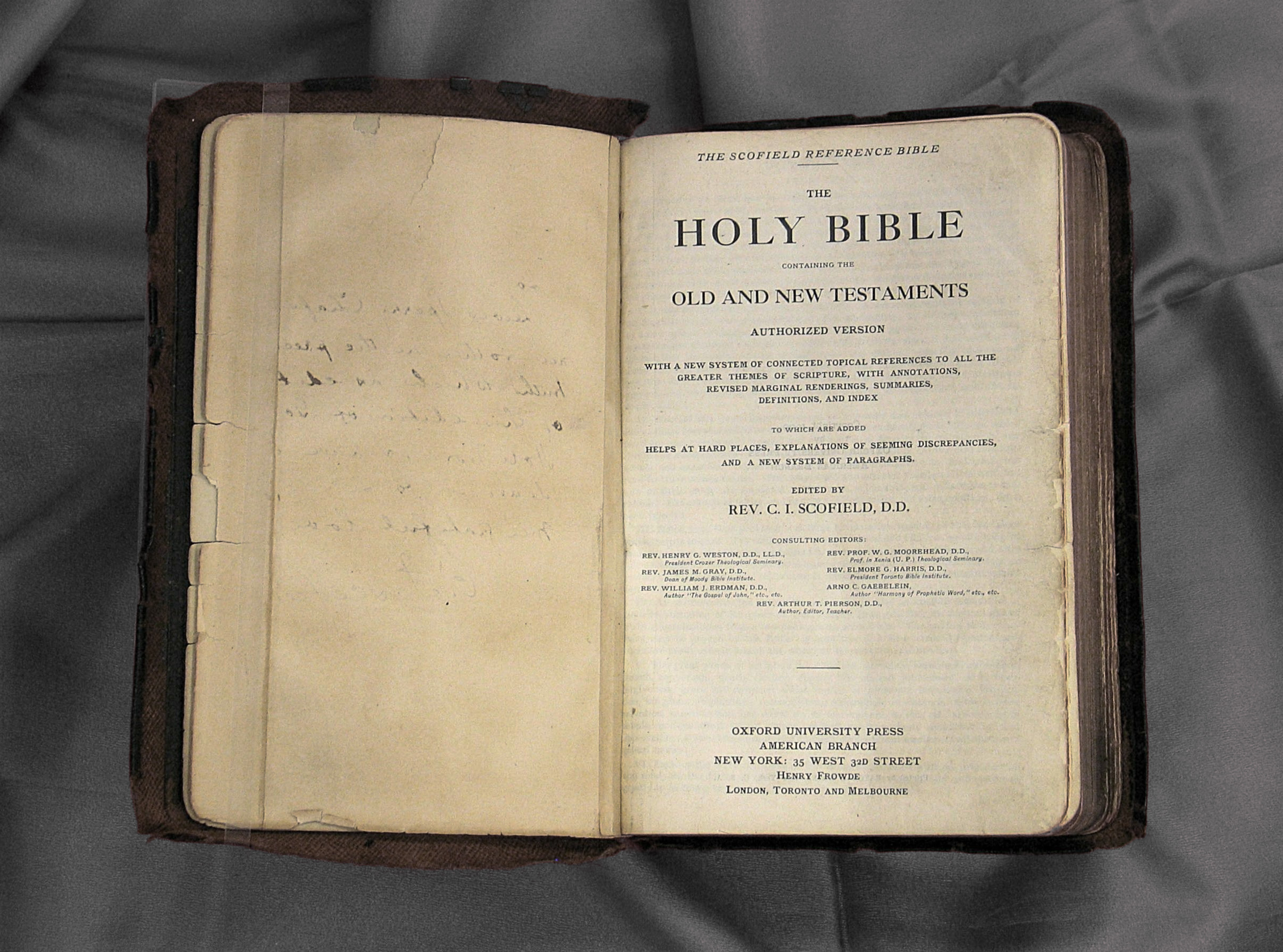 The author, Cyrus I. Scofield, allegedly had a Doctorate in Divinity, but that has since proved false.11 Originally a lawyer and later involved in politics, he was not a Bible scholar as one might expect, but rather a political animal with charm and talent for self-promotion. Scofield was a dubious character with a criminal history, who embezzled money, was forced to resign from politics, had a severe drinking problem, served six months in jail for forgery even after his conversion to Christianity, and abandoned his wife and daughters.

Researchers believe that as one of Scofield’s closest friends, Samuel Untermeyer, a lawyer and one of the wealthiest Zionists in America, funded the writing of the Reference Bible. Lavish living conditions in Europe were also funded where Scofield would come to be linked to Oxford University Press. It seems Scofield’s interest in Darbyism was shared by Oxford, which published and distributed the Scofield Reference Bible.12 Scofield stated he was paid handsome royalties by Oxford, allowing him to buy many properties.

The idea of a Rapture and its merry gang of end-times beliefs got a major boost from being taught in Bible colleges popping up all across America. Oxford University Press made sure distribution took place through these various popular seminaries and that every new pastor left school with one in hand. It was through this forced and artificial proliferation of the Reference Bible that these beliefs became solidified in the minds of evangelical churches. There was a clear and concerted effort to influence Christian belief.

Doom and gloom dispensational theology has created boogeyman after boogeyman over the decades. There is always a new Anti-Christ and a new Mark of the Beast to be fearful of after the last one gets proven to be false. Later followed by a popular movie, the best selling book of 1970 was The Late Great Planet Earth, by Hal Lindsay. In a misinterpretation of Matthew 24:34,13 Lindsay predicted that Jesus’ return might be within “one generation” of the establishment of the modern nation-state of Israel. He predicted that the end times would occur in the 1980s, where he utilized current fears of Soviet communism and nuclear weapons to draw allegories to apocalyptic imagery. In his work, The 1980’s: Countdown to Armageddon, Lindsey predicted that “the decade of the 1980s could very well be the last decade of history as we know it.”

Left Behind, a series of 17 best-selling religious fiction novels by Tim LaHaye and Jerry B. Jenkins, is responsible for pushing the idea of doom and gloom into the forefront of popular Christianity in the 90s. After selling 60 million copies, the book series was followed up by four different films and a host of video games. LeHaye and Jenkins replaced Lindsay’s Red Scare of the 70s, with budding Islamophobia and the hysterical scare of Y2K in the late 90s, evangelicals were primed for rapture fever. David Carlson, a Professor of Religious Studies, writes that the Dispensationalist theology underpinning the Left Behind series promotes a “skewed view of the Christian faith that welcomes war and disaster, while dismissing peace efforts in the Middle East and elsewhere—all in the name of Christ.”14

Despite the Rapture and it’s accompanying Dispensational beliefs not being held by most orthodox Christian scholars and theologians today, they continue to permeate much of evangelical lay theology in America. Undoubtedly, this can be mostly attributed to the widespread distribution of the Scofield Reference Bible which, sometime after it’s authors death, was re-released with edits four times up to 1967, with steeper Dispensational and Zionist leanings with each release.

Every prediction has proved to be false, and after 50 years of false predictions about the end of the world, we should probably stop paying attention. The clear historical record shows where these doom and gloom beliefs came from. The teaching that Christ’s words in Matthew 24, Daniel’s prophecies, and the book of Revelation are all referring to future events is a new system of beliefs that started at the Reformation, developed in the 1800s and became popular in the late 20th century. You may have just assumed that Christians have always believed this way, but it does not have the support of Church history or Scripture and will go down in the history books as an unfortunate fad.

Why it all Matters

Doom-and-gloom end-times beliefs are an example of what can happen when Christians rely on popular teachings rather than reading scripture for themselves. The enemy is a crafty deceiver. God saves us not by snatching us out of the world but by coming into the world to be with us. The escapist mindset behind much of the Rapture theology should cause worry. We’re supposed to be bringing the Kingdom down to earth, not escaping earth to avoid hardships. The world is not destroyed; it is renewed.

End-times theology has produced a Christianity that is wide-spread but has so little cultural influence because it recognizes no long-term hope of success. In contrast, the true Gospel of the Kingdom of God has a plan; it motivates us to pursue it, and understands that we as Christ’s ambassadors are to build into his nation and think long-term.

The Prince of Peace has established a new kind of government, a government characterized by ever-increasing peace. Weapons of war are being transformed into instruments of agriculture (Isaiah 2:4). This was Isaiah’s hope (Isaiah 9:5). What had been prophesied for generations became fulfilled with the coming of Jesus, the Prince of Peace!

The doom-obsessed end-times beliefs of Dispensationalism attempts to take that hope of Peace away. They say that Jesus is the Prince of Peace, but that peace is not for now, only when Jesus comes back again. This is not what Scripture teaches. War can never achieve peace. The Dispensationalist version of the biblical storyline requires tribulation and war in the Middle East, not peace plans. That is the most terrifying aspect of this distorted theology. Such anticipation of violence is the very reason why we cannot afford to give in to this false idea—because real people’s lives are at stake.

Read more about these topics